2015 was a great year for saying really shitty things about immigrants and casual racism. Let’s see what else it had to offer by ranking some of the best things of the year!

What do you think about women nursing in public? – Donna from Butte

100% support. Not only do we get a display of public nudity, but we get to see all of the reactions of people trying not to stare. I just wish those babies would learn to share.

I’m looking to get into juggling or yo-yo tricks soon, but I’m worried that people will think I’m weird if I spend a lot of time doing those things. Do I just need more self-esteem or is this a bad idea? – Clark from Huntsville

Go to a bar and make friends the normal way.

Why do these kids wear their pants so low? – Mary

I dunno. Rap music? Lack of belts? Barack Obama secretly orchestrated it as a means of further dividing the races in part of his plans to ruin America? Those are all equally plausible.

What can I do to spruce up my online dating profile? Melissa from Beaver Creek

Why aren’t you posting anything? – Nate from Washington D.C.

I’ve been working on a lot of new TV show pitches. Here are some of my ideas. Feedback is appreciated:

Which Way Do They Wipe – A dating show that tries to pair people together by which way they wipe.

Celebrity Face Swap – We use Face/Off technology to let Steve Buscemi and Channing Tatum spend a week in one another’s shoes. Each episode ends with a boat chase and fight to the death.

Mike Tyson Reads Young Adult Novels – Exactly what it sounds like. Accompanied by still pictures of scenes from the books drawn by severely autistic teens.

Well that mail was just as awful as usual. Please, for the love of whichever god you foolishly throw money at, send me some better e-mail. The address is SpamIgnore@Boozeandwhatever.cum. There’s also fun stuff on the Facebook page (Like Who Would Win Tuesdays (We’re legally prohibited from using Wednesday))and Twitter feed (parentheses) so get down on it. Here’s the review… 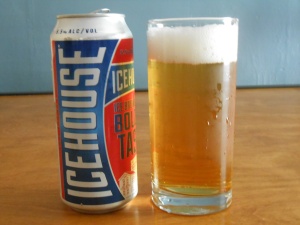 Appearance: Perfectly clear, obscured only by a stream of thick bubbles that seem to have an inexhaustible source. A lightly-hued goldenrod beer with a surprisingly long-lasting, medium head. It’s not pretty, but it looks pretty good for what it is.

Smell: One-note; a weak, wet grain. If you’ve ever been on a farm waiting for hay to dry before you can bale it, this is the smell the morning after an unexpected light rain.

Taste: Not good, but unoffensive. It has a light to medium body, tastes only of a lightly kilned malt, and other than a slightly unpleasant aftertaste of a better beer that’s been left to sit out for too long, there’s not much else going on here.

Overall: I expected this to be much worse than it was. That said, this was pretty bad and I’m upset that I have to finish this. 41/100. This was strange beer.

Up Next: Something Gimmicky!

In trying to branch out and stop wasting my time writing beer reviews that are only read by my mom, I’ve started working on some pitches for TV shows. Here’s what I’ve got so far:

Manhunt: A real life version of “The Most Dangerous Game“, but with rubber bullets.

Ghost Prostitute: Gloria Horowitz runs a brothel in Tel Aviv. On one fateful night, she’s out of girls and one of her biggest clients is in town. She decided that she’ll take one for the team and do one last job herself.

Mid-coitus, her partner, who weighs 347 pounds, has a heart attack and dies; collapsing on top of her and cutting off her air supply. Because she’s a strict hasidic Jew, she can only have sex through a hole in a sheet. She dies in this sheet, and per ghost rules, roams the world wearing the last thing she was wearing. High jinks ensue as she tries desperately to make it in a world full of smarmy, 21st century ghosts as a stereotypical ghost in a sheet.

The Shot of a Lifetime: This is a reality show where six people in dire straights compete to win a million dollars. The catch? They have to play Russian Roulette on live television. We do everything in our power to find the people with the saddest stories so that America feels a deep connection to the eventual victim, who wins nothing. Only people that pull the trigger and win get cash.

LadyCop: Mark Ladycop is a seasonal worker at Honey Baked Ham, but his real dream is to be a beat cop in the NYPD. One day, while operating the slicer, he slips and receives a deep cut. Because he has a rare blood type, there is only one possible blood donor in the surrounding area: a woman that works as chief technician at the nuclear power plant. Transfused with her radioactive blood, once a month Mark LadyCop undergoes a transformation; growing a sweet pair of tits and legs that go on forever.

As a woman, Mark is able to finally join the police force due to quotas for minority hiring. He catches the attention of an other female officer and uses what he learns as a woman to woo her as a man. Unfortunately, Mark’s time as a woman also syncs up with his period and he is forced to spend most of his transformation with terrible cramps. Most of the show is about him learning how tampons work. Can a ham man makes it as lady justice? Find out this Fall on Fox!

Appearance: Deep, clear amber; I you found a mosquito trapped in this you could re-build Jurassic park. The head is a good half-inch of thick, off-white craters. Carbonation is beyond energetic at first, but then slows to something reasonable. As I drink, the lacing is doing a gorgeous dance down the side of my glass.

Taste: All of those great smells come through spectacularly. The body is on the weak side of medium and the carbonation keeps things fresh. All that sweet fruit is well tempered by a striking aftertaste of hops and a dewy lawn that’s being blasted by the noon sun. The aftertaste will stick with you for a while.

Overall: Holy hell this was a treat. 94/100. I tend to talk down my higher reviews, but this was beyond criticism. Find it, buy it. It was an honor to be in the same room as this beer, let alone trickling it into my stomach. My liver may finally forgive me.

Up Next: Miller Fortune