Could you rank the best Halloween candies? – June from Ohio

No, but here are the worst:

I hope someone digs your grandma’s corpse up and puts it in your bathtub.

What TV shows do you like right now? – Bill from D.C.

I tape myself showering and watch the highlights during primetime hours. Summer TV is awful.

What kind of beer would you recommend for a guy that doesn’t want to seem like a hipster, wants to drink on the cheap, and wants to avoid the major breweries? – Alex from Pennsylvania

Well if you’re in Pennsylvania you should have easy access to Yeungling. I take it that you want to get away from that though, so I’ll say go for a nice wheat beer. It’s Summer and few things are more refreshing. You can find Hoegaarden pretty much anywhere. Go with that. (I need to review that.)

If you have a question find us on Facebook, Twitter, or just send an e-mail. It will probably be ignored, but at least you tried. Play your cards right and we can exchange nudes! 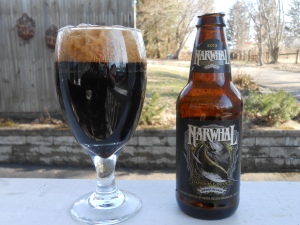 Appearance: What’s most striking about this beer is that it’s jet black and stagnant. This combination of factors, when combined with my clean glass, cause it to be extremely reflective. Not only can light not penetrate it, it’s repelled. The head is rich, colored like Honey Nut Cheerios, and laces in a nearly unbelievable way.

I’ve also noticed that it is incredibly sticky. I managed to shear off the top of the bottle when I cracked this one open and now everything that I touch is sticking to me.

Smell: Nuanced. The expected chocolate is just sweet enough to not offend the nose. The signature hoppiness of Sierra Nevada cuts though and blends with the sweet chocolate to make you feel like your walking through a field of barely just ready for harvest. I also get something reminiscent of prunes.

Taste: Given how sticky it is, the body is surprisingly not as thick as I expected. Medium mouthfeel with almost no carbonation.

The hops are right in your face with this stout. A certain café con leche sweetness coats the tongue throughout the drinking experience, but everything give way to fresh fragrant hops. It finishes pretty clean, but does leave a stinging bitterness. It’d be nice if some of that prune aroma came though.

Overall: This was fun, but it felt off. It seemed like this beer wanted to be too much. It’s certainly not bad, but this is not what I’d want out of an imperial stout. 78/100 is the best that I can do. Something didn’t work.

Up Next: Some sort of wheat beer.

A good friend of mine asked me today, “What do you call a six-year-old kid with no friends?” Being a man of integrity I had no idea what the answer could be so, “what?” I asked. “A Sandy Hook” survivor, he replied with a terrible grin on his face.

It’s a picture of beer. Why are you reading this?

Appearance: An unforgiving dark brown that sits like motor oil in the glass. The head is an ever-lasting mocha color that billows up quite nicely and provides generous aesthetic. The head laces nicely down the glass, leaving a trail that celebrates how quickly I’m drinking.

Taste: With every drink this beer simply takes over one’s mouth. The thick potent potable just coated every inch of space with its espresso and powerful malt. A bitterness soon takes over that serves to emphasize the greatness of the sweet tastes. There’s a very subtle, yet complex, fruitiness that, when detected, makes this drinker swoon.

Overall: This was more than a pleasure. I’m a vocal porter/stout snob so this was right in my wheelhouse. 86/100. I already want more of this. Send some to me damn you! Facebook and Twitter. Follow me dammit.

Up Next: Bass Stout… ewwww….