What did you think about Mayweather/Pacquiao? – John from Atlanta

I was pretty drunk for most of it, but I distinctly remember watching it from my local dive and some homeless man shitting himself on a bar stool after drinking about 10 cups of the complimentary coffee they put out. I enjoyed that more than the fight.

Way to objectify half of the world’s population. How dare you assume that I’m into women? It’s 2015 and this is a very progressive website.

Also, it’s Emma Roberts or Lizzy Caplan. I want to own them as property.

Summer’s coming up soon. Any tips to make this one to remember? – Kathleen from Columbus, OH

This website used to be funny. – Mike from Peoria

No it didn’t. I don’t know what would lead you to believe that. This is a legitimate place for serious business.

You seem like the kind of person that’s had some issues with alcohol. It’s getting pretty bad for me and I was wondering if you had any tips on battling addiction or at least managing it. – Anonymous

I’ve yet to encounter a problem that couldn’t be solved by drinking more.

Well that was that. Send in your own e-mail questions and please try to keep the racial slurs down to a minimum. Not because we’re offended, but just putting a question mark after the N-word is a very confusing question. Like, do you want to know if I’m Black or are you offering one for trade? Use your words.

Don’t forget to hit us up on Facebook and Twitter too. You can see the low-quality material that gets posted there on the sidebar here, but why risk missing anything? On to the show! 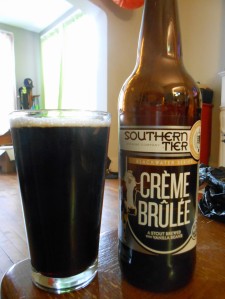 Appearance: Impregnable darkness. A wispy thin head that reminds me of a marshmallow after just 5 seconds over a campfire. It laces quite nicely too. Very little carbonation.

Smell: You get pretty much what you’d expect with something named after a French dessert. An almost cloying saccharine aroma hits you as soon as the bottle opens. There’s also a fair bit of vanilla, dark chocolate, and caramel.

Taste: A very thin body, but it still has a pleasing mouthfeel that manages to encourage me to go back for more. The strong sweet flavors are more tempered than I had expected, but it still feels like a bit much. Toasted nuts, toffee, and maybe something reminiscent of sweetened condensed milk.

The taste hits you pretty quickly and doesn’t leave you with much. There’s just a slight lingering sweetness.

Overall: This was not a bad beer and it delivered on it’s promise so I have to review it with that in mind. It wouldn’t be fair to review this like a normal stout because that’s not what they were going for. That being said, I had some issues with the strong sugar smell and the flavor profile. 76/100

Up Next: Something Bad!

Today I realized that I don’t know if it’s to babies or dogs that you can’t give chocolate. I was babysitting my one-year-old niece while eating a chocolate bar when the dog shimmied over. They both clearly wanted some of the chocolate and I knew for sure it was poisonous to one of them, but if I’m anything I’m fair; I gave them each a piece. Five minutes later I learned that nothing gets rid of the smell of dog and baby diarrhea mixed on shag carpet. To the review! 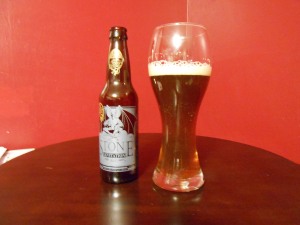 Smell: A very light and nuanced aroma. A bit of malt. Definitely some herbal notes. Very hard to read.

Taste: I’m immediately stricken by how smooth and refreshing this beer is; to say it goes down easier than Britney Spears’ career would be an understatement. The tastes are all very muted, but enjoyable. The malt comes through quite well, but I don’t get much in the way of hops. Maybe something reminiscent of apple though I may be forcing that. There’s a nice up-note in the wonderful way that this beer coats the mouth and its herbal aftertaste makes me grin wide.

Overall: This one was strange. It was so crisp and clean, the flavors so muted; I don’t know where to go. 84/100. I wanted more from the aroma, but this beer was gorgeous and I have no legitimate taste complaints. Fun Stuff.

Up Next: Columbus Brewing Co. Creeper