Now usually I don’t do this but uh…
I’m going to issue a bit of a content warning. There will be humor that will probably cross a line. If you don’t want to see any 9/11 jokes today, then move along. If you are down to laugh at the expense of the almost 3000 Americans that died on that cold September morning in 2001, then you are a horrible person…but please continue reading.

Welcome back to movie reviews, this time with more Nic Cage

With this being the 15th anniversary of 9/11, or as some call it…11/9, I wanted to watch the 9/11 of movies. Rather than watch a movie about 9/11, such as United 93, Reign Over Me (starring Adam Sandler), World Trade Center (starring Nic Cage), or Loose Change, I decided to watch a movie in the same vein as the September 11 attacks. Left Behind is a story about a plane that makes an unexpected crash landing in New York on a catastrophic day where people question God’s role in the world. Sortof like that movie Sully. 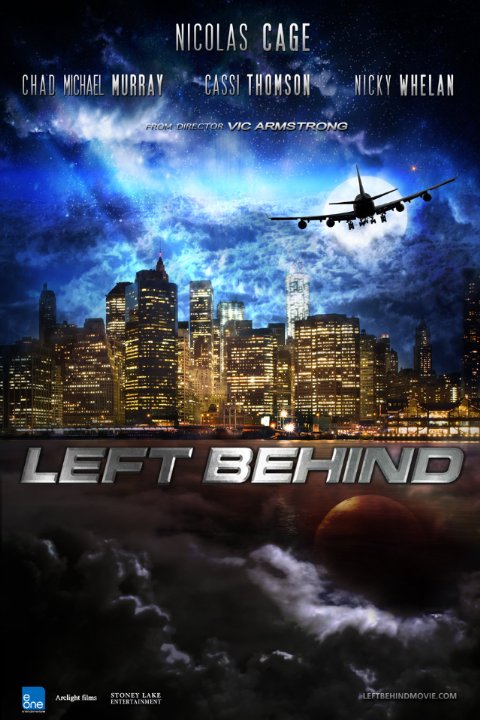 Onward to the movie….

The characters don’t really matter in this movie. It is just a disaster movie with a bit of drama added in. I can hardly remember the people’s names, and I am watching the filmas I write. Captain Rayford Steele (Nic Cage) is a pilot who wants to cheat on his wife with flight attendants. Chloe Steele (Cassi Thomson) is his daughter who is also a college student. Cameron (Chad Michael Murray) is a journalist who happens to be around disaster. All three of these characters are atheists and think the Christians that believe the rapture is coming are loons. Such as Irene, Chloe’s mother, who recently became bible crazy. 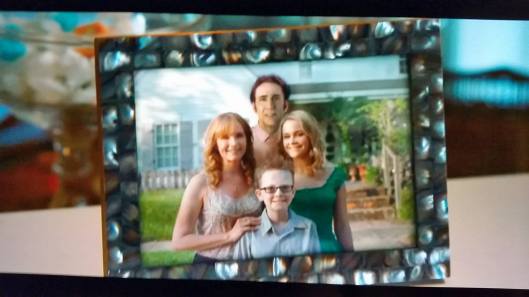 Nic Cage is never home, so they had to photoshop him into a family photo

Chloe is home to surprise her father on his birthday, but instead her father won’t be in town. She happens to meet up with him at the airport before he left. She infers from context clues that he chose to leave and is probably going to bang the flight attendant. However, she meets Cameron the journalist and tells off a crazy Christian lady who is talking about the end times.

Chloe goes home and has an awkward conversation with her mother about Jesus, God, and how her mother is crazy. The son, however, just wants to play catch with his new baseball glove. He mentions that glove maybe 6 times over the course of a minute. He never does get to play catch…that is his punishment for poor acting. 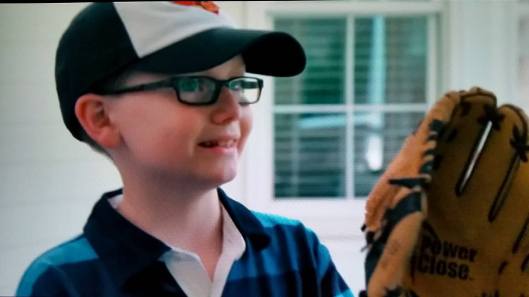 She takes her younger brother to the mall. Meanwhile Nic Cage is about to take off for his trip to London. Cameron has a first class ticket, and we get to meet a lot of interesting characters. There is a little person who gambles, a businessman who is greedy, a mother who is terrified of her football playing husband who is with her daughter, an old couple (one of which suffers from dementia), two Muslim men, and the black gentleman who sits next to Cameron. You can probably guess who does and doesn’t get raptured…

Anyway, back to the mall. Chloe is spending some quality time with her brother, and embraces him because they are so happy…I guess. Then, all of a sudden, the ground shakes a bit and the light dims for just a split second. The rapture happened. Now this is where I get confused. God took their souls, right? Does God take your earthly body to heaven? Because in this movie they took the body, but left the clothes. So….everyone is naked in heaven? Let’s roll with that for a bit. 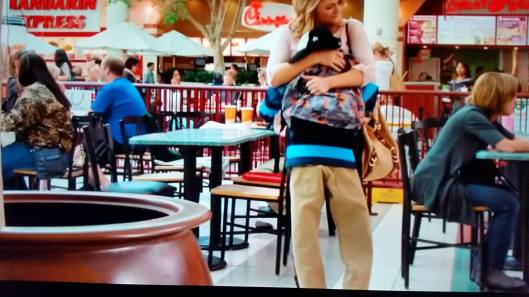 God took all the children

Just like at Sandy Hook Elementary, in this movie God decided to take all the children to heaven. Which is troubling for three reasons. 1. Children can, and usually are, assholes. 2. Not all children are baptized. 3. God took all of the good Christians AND all of the world’s children AND they are all naked in heaven. Simmer on that for a bit.

The next hour or so of the movie is boring as hell on Earth. I guess that analogy doesn’t quite work…but it is boring. As boring as life was in NYC on 9/10/2001. Everyone on the plane is freaking out because their friends or kids are all of a sudden gone. Nic Cage, who was about to join the Mile High Club, has to run back to the cockpit because his co-pilot was a goody Christian who got himself raptured. What happens next is an incredibly, no, impossibly unlikely near collision between two planes. Nic Cage could have done almost anything else and avoided this. 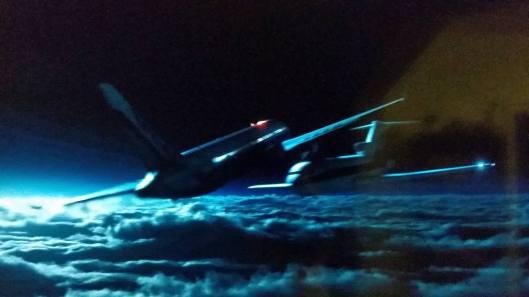 Only one of these has a pilot

The planes clipped each other, causing the other one to crash into the Atlantic. Nic Cage’s plane has a hole ripped in its fuel tank, which now means they won’t have enough to make it back to the airport. Meanwhile Chloe is experiencing a lot of trauma. She is nearly robbed at gunpoint, avoids a small plane crashing into her car which causes a huge explosion, witnesses a lot of looting and shattering of windows. Oh yeah, there is a lot of shattering of windows in this movie… 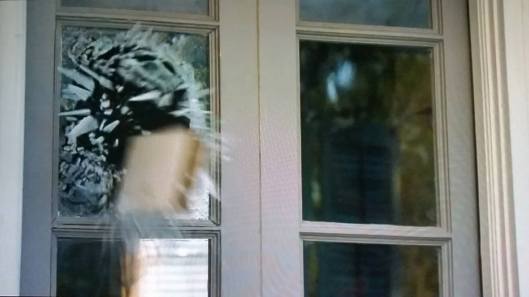 Probably the 4th time a window is shattered

Chloe goes to the church and talks to the pastor who, surprisingly, didn’t believe in what he was selling. After a lot of thinking, and believing that everyone she loves is dead, she decides to climb up to a really high place with the intent of killing herself. Fortunately, at this exact same time, Cameron tries to call her with a satellite phone. Cameron and her dad (did I mention they were on the same flight?) tell her to go and find a place to land a plane since the airport is out of reach and not cleared off. Of course she does happen to find a mile of roadway which was under construction, and faced in the correct direction, and wasn’t just full of construction equipment. 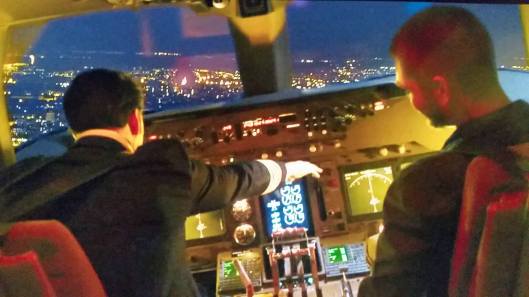 Nic Cage has to glide the plane in, and find this one road in New York at night. Fortunately there are a lot of tanks of flammable materials around so she can blow it up and point them in the right direction. You can even see the explosion on the above photo.

He lands the plane safely, which we expected since we all have seen CONAIR. Chloe runs to them as another tank explodes for no good reason except to give us this shot… 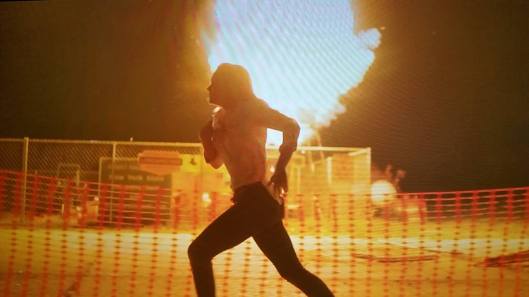 Then the movie ends with the possibility of more sequels. Fuck this awful movie

This movie is bad. Everything about it is bad. The acting, the writing, the story, the unnecessary elements of action. It borders the “so bad it’s good” line as most of the movie is just pointless or without any sort of direction. However, the first 30 minutes of the movie are entertaining and you get to see Nic Cage. I might make some people watch this movie in the coming week. 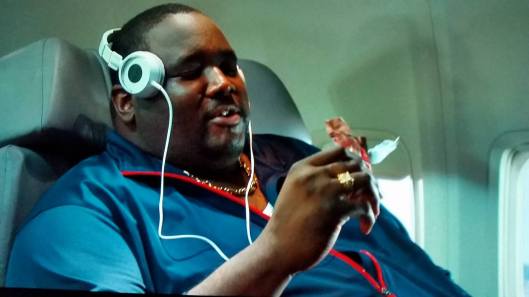 Only black guy gets raptured

The one black guy in the movie gets raptured. This troubles me. I’m glad that he lived his life well enough to be raptured, but also I don’t much care for killing off the only black guy.

There probably won’t be sequels because no one is giving them money.

I don’t imagine Gene Wilder was a fan of this movie.

This review is worse than I intended, but still better than this movie.

Next Week: The Master