What should I drink while I clean around the house? – Meg from Circleville

My dog has been having a lot of nightmares. This has been tearing my family apart. The kids are crying, my wife is packing a bag, and I’m just looking at our bank statements and I can’t get these numbers to work. Please help. – Josh from Agoura Hills

I got this e-mail like seven months ago. Let’s just assume this guy is dead and move on.

Better song: Do A Little Dance -or- Play That Funky Music? – George from Chicago

That’s a good question. In fact, it may be the first good question ever asked. I have to go with Play That Funky Music because everyone goes crazy during that chorus.

Well that was as awful as it usually is. Share the Facebook and Twitter pages with your friends. Let’s boost this signal. Send e-mail questions too or next month is just answers to beer recommendations. I hate beer. Here’s a beer review. 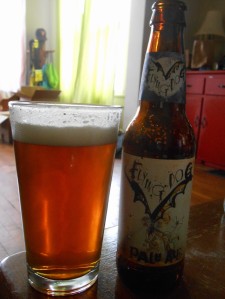 Appearance: I’m seriously considering forcing my girlfriend to go through the teleporter from “The Fly” while holding a glass of this so that I can have daily relations with this. In hindsight though, my girlfriend won’t let me near her so that may not be the best description.

It’s got the golden hue of unfiltered honey, very low carbonation, a dreamy haziness, and a sticky off-white head that leaves it’s mark once you’ve finished off your glass.

Taste: Not as exciting as I’d hoped. It’s got a watery feel and not much of any taste aside from hops, but even that taste isn’t very pronounced. There’s really no finesse here. It’s not bad, but I expected a lot more punch from a pale ale.

Overall: This one fooled me and now I’m mad. 68/100. I’ll concede that the graphic design on the bottle is awesome and this was fun to look at, but taste is where my bread is buttered.

The night was black. Central Ohio Undead and Ghost Hunting (COUGH) was having its first monthly meeting of the new year when we heard our phone sound for the first time since we’d been forcing ourselves to come to these meetings three years ago.

The three of us sat silent for the first couple rings when Nick decided that he was the only one of us not completely shaken by nerves. Nick wasn’t the bravest, or the most talkative, but he loved doing this more than the rest of us and had been waiting for this day more than anything else.

I could only hear one side of the call, but from the way Nick’s face dropped I knew this was big. He hung up the receiver, turned to us, and asked me to cancel the pizza delivery for that night; we were going out.

The client was Shelly Globke, an 81-year-old widower living in German Village. He invited us into his home and sat us down in a room lined with heavily worn books and dull light provided by a single antique lamp on the verge of death. There were four fresh glasses of tea waiting for us on the coffee table.

Suddenly remembering my position as leader of the group, I asked Shelly why he called.

“Well,” he rasped, “you should first know that my dear Evelyn passed just last week. She was all I ever cared about. She… I think she’s back.”

Now I understood why Nick had been so solemn on the phone. This was just a sad, lonely man that lost his only companion. He’d entertain any fantasy to have her back. We’d humor him.

“I’m so sorry for your loss Mr. Globke. Would you mind if we have a look around before you tell us how the spirit manifests itself? It’s best we do this before you go into detail so that we aren’t influenced.”

“Of course. Do whatever you need. I’ll be waiting here.”

As we left the room to grab our gear Mr. Globke began to thumb through an old photo album and tear up. We weren’t built for this.

“We can’t actually do this,” yelled Dan. “I sympathize with the man, but I can tell what you two are up to and I won’t support an old man’s delusions. He needs to move on. No one wants to find a ghost more than me, but this is ridiculous.”

“Let’s just give it a chance. This is the first time we’ve ever been called out. Besides, I’m in charge here so it’s my call. Let’s look around.”

We swept though the house and took every reading that we could. Whenever I passed the doorway leading to Shelly’s study I gave him a nod and a smile, but I knew this was helpless.

I could hear Nick running upstairs.

Part two will drop whenever. Check out the Facebook and Twitter pages for updates. Send e-mail questions too. They are all I have these days… On to the review!

Appearance: Otherworldly pale and super fizzy. A flash of a white head is gone before you can get your god damn camera out of your god damn drawer. Clear. Like distractingly clear.

Smell: A flooded basement one week after cleanup.

Taste: Water and a tiny bit of corn syrup.

Up Next: Something nice.